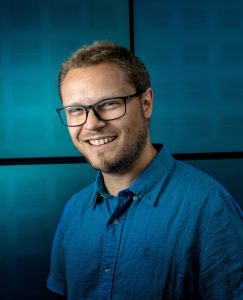 SECLI-FIRM welcomed Professor Pierre Pinson to the University of East Anglia on Thursday 21 March, to give a seminar on renewable energy forecasting.

Pierre Pinson is a Professor at the Centre for Electric Power and Energy (CEE) of the Technical University of Denmark (DTU), and a highly-respected specialist in the proposal and application of mathematical methods for electricity markets and power systems operations, including forecasting.

The seminar focused on ‘Recent problems in renewable energy forecasting: towards high-dimensional problems’.

The session was also broadcast as a webinar and a recording is available here for those who were unable to attend.

Wind power forecasts with lead times up to a few hours are important for system operators and utilities to maintain a balanced and reliable power system. Commonly, these forecasts are computed by time series models that are mainly based on past data from the forecast site. More advanced models additionally employ data from surrounding sites or can adapt to changes in the weather regime or wind farm setup.

The wealth of data generated by an increasing number of wind power installations does not only provide possibilities for improvements but also challenges for common forecasting methodologies. We will introduce, apply and discuss some of the recent proposals for high-dimensional modelling and forecasting, mainly based on vector autoregression (VAR) and some generalization (for instance with regime-switching), as well as sparsification of coefficient matrices. This will first include the well-known Lasso VAR, as well as an online version of that estimator.

Furthermore, alternative approaches to sparsification for VAR models will be presented and the balance between forecast accuracy and computational costs will be considered. Applications will be based on datasets with tens to hundreds of sites in Europe and Australia and perspectives for operational applications with thousands of sites will be discussed.

Pierre Pinson is a Professor at the Centre for Electric Power and Energy (CEE) of the Technical University of Denmark (DTU, Dept. of Electrical Engineering), also heading a group focusing on Energy Analytics & Markets. He holds a M.Sc. In Applied Mathematics from INSA Toulouse and a Ph.D. In Energy Engineering from École des Mines de Paris (France).

Pierre has acted as an Editor for the IEEE Transactions on Power Systems, the International Journal of Forecasting and Wind Energy. His main research interests are centred around the proposal and application of mathematical methods for electricity markets and power systems operations, including forecasting. He has published extensively in some of the leading journals in Meteorology, Power Systems Engineering, Statistics and Operations Research.

Pierre has been a visiting researcher at the University of Oxford (Mathematical Institute), the University of Washington in Seattle (Dpt. of Statistics), as well as a scientist at the European Center for Medium-range Weather Forecasts (ECMWF, UK) and a visiting professor at École Normale Supérieure (Rennes, France). Currently, he is a Simons Fellow at the Isaac Newton Institute for Applied Mathematics, Cambridge, for the semester on the mathematics of energy systems.

The SECLI-FIRM project has received funding from the European Union’s Horizon 2020 Research and Innovation Program under Grant Agreement 776868.

We're not around right now. But you can send us an email and we'll get back to you, asap.